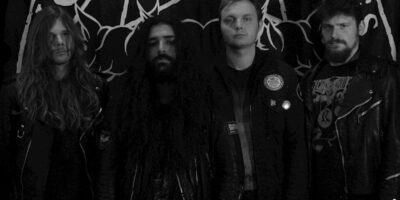 It is no secret that Maggot Stomp has become one of the first labels I look for when I am in need for some new rotten Death Metal sound – after having released the notorious demo tapes by bands such as Sanguisugabogg, Frozen Soul or Malignant Altar. Hence – this release by Disembowel has become mandatory.

I‘ve known them since they were kids and they are still growing.

Just a month ago I took a closer look at the label Lower Class Kids Records – and immediately found out about this crazy record. Although the music itself was released already, this will be the release of the LCKR tape version – this is a wild mixture of downtempo Powerviolence and Death Metal.

Post-Rock meets Greek mythology, a combination that sounds interesting and seems to fit well. The story of a mythological figure told by guitars and drums – they have my curiosity.

Hyperdontia – Excreted from the Flesh

The debut album release by this Danish / Turkish Death Metal combination was an absolute blast and caught me immediately when listening to it for the first time. Extremely rotten and disgusting Death Metal nuanced by subtle melodies at peak level.

Heaven Shall Burn – Of Truth and Sacrifice

Deathgrind itself is already quite nasty – it gets even nastier when the lyrics are written in Spanish.

Dismal Fate Records has been on my radar for some time already now – but DAMN this shit is NASTY – get your hands on this tape of Continuum of Xul if possible!

Still no gaslight anthem on the horizon, so i‘m hoping he‘ll patch me up.

Crypt Dagger – From Below (MLP)

Recently, a lot of releases coming from the Black and Thrash mixture came up and I slowly started to get interested in this blending. Crypt Dagger is a promising release that has already been praised a lot of times – I will keep an eye on this one.