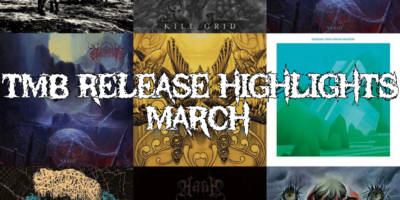 Spontaneously, Tides From Nebula announced a live sessions album on Bandcamp two weeks before release. I am curious what it will sound like, some bands achieve a lot more in live sessions, some don’t. In my opinion, TFN can be a very good live band, their album last year proved their skill.

END – Splinters From An Ever-Changing Face

Anyone who is waiting for a new Nails record should definitely check out END. Another super-group worth checking out if you are into REALLY pissed off music.

Blackened Thrash Death Metal…got interested? Me too and you should be as well. Heavy, catchy and frosty.

Naxen – Towards The Tomb Of Time

The “To Abide in Ancient Abysses” EP that was released last year absolutely haunted me throughout the entire year. Naxen present fresh Black Metal that makes use of just the exact amount of USBM you need to finish great releases.

Artwork by Rémy Headsplit Design, mixed and mastered by Vamacare Studios, this is presenting us fresh new Speed-/ Thrash Metal directly from France!
Ready to Fire!

3/4 Church of Ra + 1/4 YOB vocalist = can‘t be not awesome.
(Steven has the EP preordered at Evil Greed in a fancy pressing and Roman ordered it on tape ’cause he is a trve motherfucker)

If you are into very melodious Blackened Death Metal with strong riffing spiced with eerie synths on top – listen into this release!

I am absolutely in love when bands succeed to have Black and Death Metal overlap at such a great level that you can no longer tell where to locate their releases. Ulthar are perfectly able to do just that.

Canadian Prog Metallers Protest The Hero finally release some new tunes after the excellent Pacific Myth EP from 2016. Check out the frisky “The Canary” and the pretty epic “From the Sky” to get a foretaste of what to expect!

Self-titled albums mostly mean that they are literally „essential“ releases: The essence of Lamb of God‘s sound. The first release with their new drummer and I‘m very eager to hear it.

Lantern’s unique style is haunting us since 2007 and this year, they will blast us with new stuff from Finland! Stay ready! Finest riffs and solos are coming!

Funeral Doomers Ahab release their first ever live album, recorded at the Death Row Fest 2017 in Jena. The songs are taken from their first record “The Call of the Wretched Sea”, a concept album about Herman Melville’s Moby Dick.

Long Distance Calling – How Do We Want To Live

Seven months after their great live album “Stummfilm – Live from Hamburg”, LDC release their seventh studio album this month. The single “Hazard” sounds more experimental – there are more electronical sounds, but in a good way, with an album art that reminds me of a lot of 70s science books. LDC are a band that smoothly cross the lines between Post-Rock/Post-Metal throughout their songs. Similar to other Post-Rock bands, the main topic will be the human and a world in the near future.

And again, a very spontaneously announced album. This time it’s from one of my favourites, Mantar. It will be a cover album to entertain us through the lockdown. The first single release is the song “Ghost Highway” by Mazzy Star.

After “Call to War”(2010) and “Death from Above”(2013), vocalist Michael “TZ” and his guitarists Eric “Tormentor” and Myrdhin “Murphy” will serve us fresh high-this quality Thrash Metal from Germany. We already know that will be a feast!

Fresh new Death-/ Thrash Metal from Tel Aviv – Dude, I’m ready for what they will serve us after the release of their first track on Youtube, “Rogue Planet”!