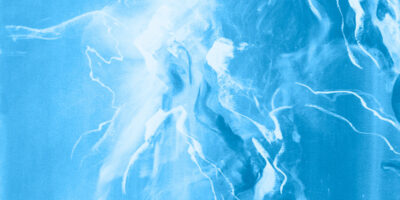 Although summer is not really my favourite season to deal with frosty Black Metal, a release from this genre has made it into my focus. I’m talking about Aara whose new album En Ergô Einai accompanies me every day and has turned my head with its famous melodies.

The ominous trio from Switzerland admittedly doesn’t deliver really dark Black Metal anymore, as it was partly still the case on their debut record, but shows on the new album more and more traces of modern DSBM á la Ghost Bath and some elements from the post area. Musically, Aara are more in line with more progressive bands like Fluistaars or Laster without neglecting their own touch. During the production the fan can also look forward to a big leap, which is well suited to the instrumentally very demanding sound and has packed the different technical details in an appealing quality and puts them in the right light.

With En Ergô Einai, Aara really show for the first time where their strengths lie, because the album seems very well thought out and, thanks to sophisticated songwriting, gives the exciting instrumental parts much more space than has been the case so far. Especially the distinctive riffing benefits from this, which can quickly burn itself into the memory with a wealth of catchy melodies. The guitar playing, however, doesn’t move so much in the classic Black Metal area, but rather has a wistful and longing arousing effect, which is especially underlined by the already mentioned post-impact. Nevertheless, the Swiss create a partly hypnotic aura, which runs through every single song, but seems changeable and adapts to the respective parts excellently.

Even if the longplayer doesn’t look as dark as most of the others in the Black Metal genre, En Ergô Einai has a special aura, which I think is very well reflected in the coverartwork. You could compare the mood to the feeling you get after waking up, when you are not quite awake yet and you are following a positive, motivating dream that urges you to leave everything behind and face your greatest fear.

The most recommendable song to get your own impression of this record is probably “Aargesang (Aare II)“ which with its Interlude-like start represents the darkest scenery you can find here, but after that it ignites seamlessly and ends in furious banging.

Much more Black Metal is conveyed by the nasty vocals, whose cutting vocals are always running through the dense atmosphere, only intensifying the desperate feeling of longing. Variety is offered here by enigmatic sacral chorus. Without any ifs and buts the main vocals and chorus insertions are the absolute highlight of the record, besides the melodies. But also the blastbeat-heavy drumming is clearly to be found in Black Metal and knows to inspire with balanced cymbal playing.

Nevertheless, Aara may sound a bit darker in my opinion in the future to do justice to their obscure appearance and to give their sound that certain something. Technically, there is nothing to complain about, since the quality of the disc is generally quite high and convincing in and of itself.

Since April 3rd En Ergô Einai can be ordered as CD and LP from Debemur Morti Productions, where Aara should fit perfectly into the roster in my opinion and should be on a similar level as most other bands of the label.

Aara have surprised me quite a bit with En Ergô Einai, because the debut album had passed rather unnoticed and the Swiss with their melodic Black Metal have only now really played themselves on my screen. Thanks to its unpredictable song structures, its distinctive instrumentals and a musical variety in which you can get lost quite a few times, this album will certainly quickly find great acceptance in the metal scene and will soon draw larger circles than before.