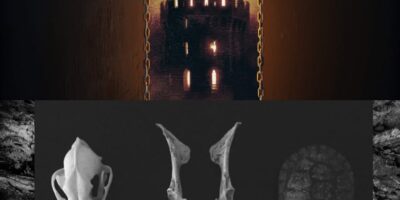 Today’s article is about a release that I have been looking forward to for quite some time and that was eagerly awaited by me. I’m talking about the Polish 90’s Metalcore Combo Embitter, who have finally released a longplayer with 1134. I listened to the demo and EP almost up to level by memory and I have already organized the band myself in Weimar and found it to be very intense.
Even though you won’t find quite as much H8000 sound on the album as you were used to, 1134 is an absolutely tough patch that has a maximum 90’s vibe and has also packed in some new influences from other perhaps slightly surprising genres like for example Dungeon Synth – yeah correctly read, some Dungeon Synth, sounds strange at first, but fits perfectly and is only one of the highlights of this record.

Embitter almost perfected the existing Metal influences on 1134 and should be the general standard of the band in the future. Except for the two tracks “Orwellian” and “Fuel Of Fire” which you already know from the previous EP, there are barely any breaks and dull elements left. Instead, the sound seems much more atmospheric and above all much more balanced than before.

The album is going to start from the polish with cool dungeon synth sounds that change to hard riffing and aggressive double bass drumming after a short melodic bridge. The opener and at the same time title track “1134” shows right at the beginning, however, that Embitter’s sound has moved a bit further away from the classic 90’s Metalcore sound and the Metal influences gain much more weight, which also suits the dark atmosphere.

In the course of the record the guys vary with some elements, without giving the impression of still trying themselves out. The songs seem well thought out and sound, most of them like very moshing Black Metal in hardcore tempo.
This becomes especially clear for example on the third track “Fahrenheit 451” where an excellent change of rhythm forms a bridge between Hardcore and Metal. In general this is also my personal favourite on the record, because the metallic riffing strongly reminds me of the Scottish Band Revolve, while the setting could also come from modern sounding Length Of Time. Embitter then finishes off “Fahrenheit 451” with very concise and harmonic synths again, which completes the track entirely and at the same time makes it a starting point for me to get a taste of the quality.

Furthermore, the drums are incredibly powerful over their entire length and surprise again and again with various swirls and tempo changes. This massive drumming definitely puts a certain stamp on the sound of Embitter and makes the already hard sounds even more violent. However, it has to be said that 1134 won’t be the hard mosh album for toughguys, because here they deal with the hardness of reality and you can hear and feel Embitter’s anger and desperation about the current political situation in their home country.

Thanks to the sometimes noisy riffing and the recurring melody parts the guys create a very dense and stirring atmosphere of oppressiveness, which in my opinion is more brutal than any break. Even though “Orwellian” for example also provides you with that kind of violence, just not inflationary like other representatives of the genre, it also increases the intensity of the respective downtempo parts.

There is absolutely nothing to complain about regarding the production, because all instruments and synthesizer parts are perfectly coordinated, permanently massive and heavy, but without stifling the desired atmosphere. With 1134 Embitter have released a completely well-rounded metalcore record, which you should definitely get as a genre fan if you want to hear how the sheer hate about a lived dystopia sounds like, which has become a reality for the band and other free-thinking people in Poland. You can also derive this from various song titles like “Fahrenheit 451” or “Orwellian”.

Via the british label THE COMING STRIFE RECORDS, 1134 has been available since August 14th. Due to Covid-19, a slight delay in the release of the record is expected, and it seems that it will not be finally shipped until early September. If you prefer the cassette version of the album then CAVALCADE RECORDS is the place to go. There is also very probably a CD release on the schedule but there are no more concrete informations til now.

With 1134 Embitter deliver a fantastic metalcore record, which captures the current political anxiety of the Polish youth in an excellent way and thanks to the partly epic soundscape can let the flame of resistance against conservative, white men blaze a little bit higher. Support the band and with it the LGBT Movement in Poland and everywhere else, these are times when the outsiders of society have to pull together again to be heard and respected!