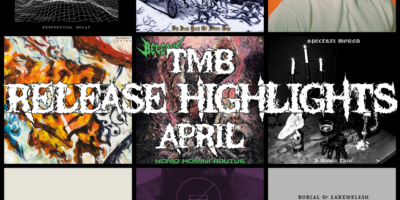 Everyone who enjoyed their previous records must have been waiting for this to be released after their highly acclaimed At the Walls.

Absolutely mesmerizing, atmospheric Death Doom from Portugal that should be on your scope.

Eyehategod – A History of Nomadic Behavior

It’s been a while since the Scottish Sludge/Prog-Metal band’s 2017 debut “Asheran”, but if their 2020 EP “Omega Severer” was any indicator of what’s to come, we are all in for a treat with their sophomore album and debut on Metal Blade!

Long-awaited comeback album by Genghis Tron, 13 years since the zombie apocalypse of Board Up the House. Definitely worth it

Citizen – Life in Your Glass World

Spring is coming and so is the new album by Citizen. I expect nothing but sweet melancholy.

You must have been sleeping under a rock no matter if you were awaiting this release or not. Going by the singles that were released so far, this is a hot contender for my AOTY.

The last release by this mysterious Black Metal band already felt like listening to classical music on distortion.

Debemur Morti praises this album as an overlooked masterpiece of 2020 now receiving its vinyl release – and they are damn right. This is the exact amount of Bestial Hymns of Perversion blast you need.

The demo “Mass Extinction” by New Wave of British Death Metal combo Celestial Sanctuary already stirred up a lot – the fulll-length debut is going to be on the scope of a lot of people.

Little Hole Filled – And The Ants Still March On

A “bastard” of Doom, Stoner, Sludge and Metal? Bring it on!

If you ever wondered what it feels like to mix the guitars of Touché Amoré with atmospheric parts in the vein of Citizen, you might be interested in listening into this.

Urgent and restless comes to my mind when describing this short burst of Hardcore from Germany.