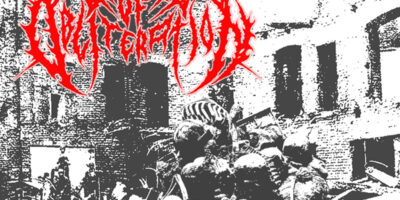 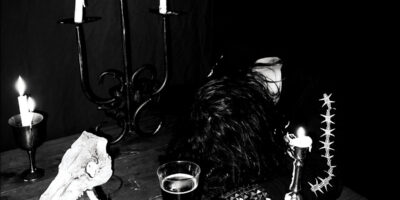 Like a phoenix from the ashes, Dödsrit arose from the remains of Totem Skin in 2017. Planned as a solo project, two very strong albums are released. In the meantime, however, Dödsrit have transformed into a full live band (including members of Nuclear Devastation) and are back with their third album. Mortal Coil will be released on May 28 via Wolves of Hades Records. Dödsrit play an interesting mix consisting of Black Metal, Crust and Post Hardcore. The mentioned genres are also widely distributed throughout the album and it is difficult to classify the band stylistically. However, exactly this makes the troupe from Sweden and the Netherlands so interesting.

Melodic guitar riffs as can be heard on “The Third Door” or “Shallow Graves” create a lot of atmosphere. The interplay of the guitars now and then also very much remind of Swedish legends like At the Gates. Especially the harmonic sound provides this impression. Through their very distinctive and innovative style, Dödsrit manage to take the listener on a journey. This is not a phrase that you like to write in reviews, on the contrary. Rarely has an album gripped me so much and literally sucked me in. Of course, this is no walk in the park. It sounds desperate, gloomy and partly oppressive. This mood is also well reflected in the lyrics of “Apathetic Tongues”. In the song itself, you can find small fragments that are reminiscent of Totem Skin. It is the mixture of melodic riffs, paired with brute Black Metal drumming, which creates this impression – especially when you are then surprised by a beautiful heavy metal solo.

A similar aspect can be found on the title track. These unexpected elements make the sound of Dödsrit very different from other bands. Especially the atmosphere is underpinned by single structures, which are strongly taken from Post Rock or Hardcore. A good example of this is offered with the last two songs on the album. The drumming is also interesting. At the beginning you could still think that ojen blast beat after another is going to be shot around your ears for the next 35 minutes. However, there are many tempo changes to be found. “Shallow Graves” features some quiet passages.

Maxouri‘s vocals dispel somewhat the crusty impact and a melodic picture emerges. This, however, is not to say that Dödsrit forgot their crusty roots. On the contrary, the distinctive voice of Öster is still present and better than ever. Especially in the interplay with drums and guitars, in some places the impression arises that a Wolfbirgade or M:40 song would have crept onto the record. The album therefore offers many varied moments. It is an emotional ride on a rollercoaster. Especially the last moments on “Apathetic Tongues” immediately crawl under your skin. For those who might be struggling through the pandemic at the moment or are on a dark path, this album might speak from the soul. Rarely have I been able to identify with music as much as I do here. You feel understood, almost an empathic aura that flaunts the current big picture within yourself.

This is exactly the feeling Dödsrit convey for me. Melancholic is possibly the most fitting description for this masterpiece. If you are looking for an interesting mix that fits into a coherent overall picture, you should listen to or buy Mortal Coil as soon as possible. For me it will probably remain more than just a strong release in 2021, because I can identify very much with the album. I don’t know how the guys are going to top this release in the near future, but maybe they don’t have to, as each album speaks for itself and you can clearly see the development. More of this please and thanks for an album that should end up on some year end lists.