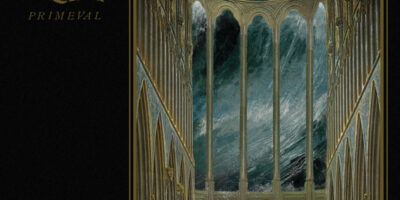 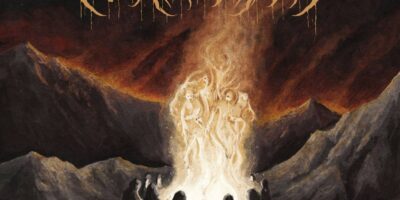 Recently I browsed through a group on Facebook about international Death Metal and someone asked for any “good” German Death Metal bands. The replies ranged from “there are none” to “Debauchery” – which means from bad to worse. These guys seemingly have never heard of bands such as Morgoth, who already marked the spot of German Death Metal in a worldwide community years ago. Additionally, younger bands like Deathrite drastically represent German Death Metal on an international basis, especially with their latest release When Nightmares Reign (boy – that Soulside Journey sound was lit). Speaking of the fact that this experience was a few weeks ago – these guys have certainly also never heard of the boys from Deserted Fear, who currently bulldoze through German music media with their latest release Drowned by Humanity. Steven told me to check these guys out and write a review and oh man was he right. This album serves as the youngest example to mark Germany’s spot on the map of Death Metal.

Deserted Fear is a band from Thuringia in East Germany, consisting of three members (four on stage with their bass player). The band released their first album My Empire in 2012. Their now latest and fourth release Drowned by Humanity was released on the 8th of February, two years after their last release Dead Shores Rising in 2017. The album, consisting of 11 tracks and spinning for 47 minutes, was produced and mastered by Deserted Fear‘s guitarist Fabian Hildebrandt and Henrik Udd, who is well-known for producing bands like Dimmu Borgir, Bring Me The Horizon or Architects. I am pretty much in love with the fact that members from the band itself also engage in the act of producing their music – or even initiate the process in the first place. Thus, the artist can make sure that what is produced also strictly fits the band’s demands.

The first track on this album is an intro track that is the one and only song on this album I just cannot understand – even after having heard it for a thousand times. In my opinion, the opening track is one of the most important songs on the entire album and this track seems to not connect to the album at all. If it at least faded out in the end in order to serve as a transition for the first track on the album or similar, I would have understood. But – this does also not happen. Never mind – because this track only lasts for about a minute and then – oh boy – hell breaks loose.

The first actual track on this album “All Will Fall” is a massive banger that only takes a few seconds to let you know where you are. The melody on this track is insane and Manuel Glatter kicks out straightforward lyrics that remain so damn on-point throughout the entire album. This track remains within the range of a mid-tempo that lets your head bang so hard that you will probably not be able to say yes to your coffee in the morning on the day after having heard their music. Jokes aside – the melody combined with the slower tempo on this track immediately portrays the style that is to come on this album. The production is very clear-cut and lets you enjoy every bit of that song.

With the elements of this track it is also possible to explain some of the many upsides on the album that range throughout the entire work. Every single track has a distinctive melody, which is smoothly produced and goes so well with the rawer sound of the rhythm guitar and thrasing drums. Deserted Fear also succeed to construct a melody theme that follows you through the entire track – we start off with a decent melody and while listening we are always able to recognise that melody in altered versions. The second track “An Everlasting Dawn” also follows this pattern while accelerating the speed a little.

On this second track it becomes also evident again how well Glatter’s lyrics distinguish between verse and chorus – because he always switches into a high-pitched voice when the chorus begins and – it – is – so – damn – good. We can detect this way to deal with a chorus on the next track “The Final Chapter” as well. During the chorus that often goes with another distinguishing melody, we can also clearly spot the obvious influence of Swedish Death Metal on this band. If you listen to Dismember, you should also listen to Deserted Fear. This aspect combined with the soft production of the melodies on the album and thrashing rhythm guitars lets you know why it is necessary to give this band a listen.

Another feature that came to my mind while listening to the album for the third or fourth time was that I was not able to detect any solo. Some Death Metal hardliners will now go like – what?! this ain’t no Metal, where is the goddamn solo. To me, however, as a boy who comes from the more Hardcore-ish side of faster music, this aspect is quite enjoyable. Remembering that just some time ago there was a huge hype of Death Metal-infused hardcore within the scene, some decent hardcore features in actual Death Metal go down nice and clean. Apart from that no-solo aspect, which opens up the possibility to focus on the speed of the track, we can also hear a breakdown part on “Reflect the Storm” that made my heart jump high just for a second. Don’t get me wrong – this ain’t no hardcore – it is straightforward Death Metal. When having experienced that Death Metal phase in the hardcore scene however – some features are just too evident to evade.

The final track “Scars of Wisdom” eventually again builds up high tension and develops a more epic sound. The song structure changes, thus highlighting this track, and the melodies build up a more anthem-ish sound that clearly marks this track as the final song of the album. Many bands disregard the fact that it is also quite necessary to focus on the end of an album – Deserted Fear are not part of that canon. This last track lets you hear that you are at the end of something big and marks the end of the album, which is a great thing.

Having heard the many upsides of the album, we can however also spot some downsides on this work. The first one that came to my mind is the fact that the song structure – which is a banger in the beginning – does not change too much throughout the album. This eventually leads to the fact that some of the tracks feel no different from other ones. When the first few tracks kicked you off your feet – you get acquainted with that sound and it gradually loses its feeling after having reached track 8 or 9 to a certain extent. Additionally, the tempo remains quite the same throughout the tracks. We can get a decent banger sound from this slower tempo – but I would have expected at least one or two faster tracks that speed up your listening experience and afterwards we can jump right back into that mid-tempo. Without tracks like these, we feel a little bit monotonous after 11 tracks of bangers.

All in all, this album is a massive banger and a must-listen for every Death Metal fan – especially if you are interested in your regional music scene. We feel at home with distinctive sounds that also lyrically discuss crucial aspects such as the way in which humanity interacts with their environment. Having built up a solid ground with this album, the band might also try to deal with some new and faster (or slower) sound on their next album, which would give the band the option to show how versatile they actually are. I am very keen on listening more from these guys.

As usual, the two favorite tracks of the album will be included in the Transcended Review Playlist where you can listen to the songs we liked the most on every album we reviewed. What about the rest? Are you in love with this album? Have you even heard of this band so far? If not – check them out! Tell us anything you agree or disagree with in the comments!