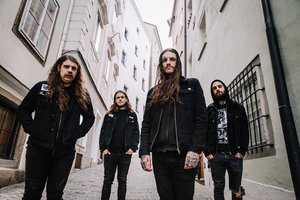 The Frostbiter ’til Deaf is a small underground festival organized by the users of the Deaf Forever Forum, which I am part of myself. It is the fifth time that we met, celebrating bands from users of our forum and having a great party. That was my second time, and, to be honest, it wasn’t my best day. I woke up with some pain in my back in the morning, which caused me to take some medicine, so no beer or sweet woodruff liquor for me on this date. That’s the reason why I came late and only watched three bands, but in my opinions it’s still worth to mention the bands and the festival.

As I wrote, the festival is organized by a large group of users of the Deaf Forever Forum. The Deaf Forever is a German magazine about Metal music with a focus on smaller bands and labels. We, the users of this forum, had a good time on several occasion, whether it was a BBQ-Party in one of the users’ garden, or nearly 100 users meeting in Hamburg for the Hell over Hammaburg Festival, and even an unforgettable wedding with special guests, a whole concert by Skyclad, the newlyweds’ favourite band. Don’t ask how we got them there, it was an amazing adventure, and the look in the newlyweds’ eyes when the band entered the party room was worth everybody’s work. As you can see, it’s quite a nice group of people, and somehow became a kind of family over all the years.

This year, the Frostbiter took place for the second time in the Underground in Wuppertal, an event location and a Metal bar in the city center near the main station and the cinema. This year, we expected six bands from users in the forum and a non-forum special guest. Let’s start with the special guests, and the last band of the night:

Sabiendas from Recklinghausen, playing Old-School Death Metal. On 1st of May, they posted on their website that they are done with recording and production of their new third album Repulsive Transgression and are looking for a new label and distribution partner… Just in case you know somebody… 😉

The first band, starting in the afternoon at 3:30pm already were Architects of Aeon from Thuringia with their “Endtimes”-Metal, a combination of athmospheric Death- and Doom Metal. Their first album Koloss was released end of March and you can check it out on Bandcamp. I really liked their stuff while checking the bands before the festival, but I was too late to see them, to be honest.

After I left, round about 8pm, there were still two other bands to play, before Sabiendas entered the stage. First of them was Hell Patröl a Speed Metal band from Heidelberg. Their last album was released in 2018, named Leather and Chrome. Do I need to say anything else?

Powergame from Bielefeld released their album Masquerade already in January 2019, and it is the right thing for fans of twin leads and the NWOBHM. And dammit, they got a wrestler on their cover. So guys, I really hope you can excuse that I didn’t see you in action…

However, there still were three other bands to see and hear. When I entered the Underground, there were Hovercraft Hammerfist on stage. I grabbed a non-alcoholic beer, took a seat, you remember my back, and listened to the three guys. Stoner Metal and Punk combined, theyself describe their music as a combination of Queens Of The Stone Age, Crowbar, Down and Corrosion Of Conformity. To my ears it sounded like some Type O Negative in their sound as well. I was wondering why they didn’t have a bassist on stage, but in times of bands like Mantar, I don’t wonder about anything any longer. They sounded good the way it was, that’s all you need to know. If you like, check their Bandcamp-Page.

The second band I saw from the very beginning was Arctic Winter. It was hard to believe for me that they already formed in 1989 and have their 30th anniversary. They initially went by the name of Ascalar, renamed themselves Arctic Winter from 1991 on, and paused from 1997 until 2007. What kind of music do they play? Just Metal in the band’s opinion, because of all the elements which they mix together – and yeah – there are quite a lot elements in their music. One song sounds more thrashy, another one just heavy, and the next has got some black elements. And Mic on the mic can handle all the styles. Good man on the mic. They mixed their own stuff with some covers. I’m not really sure if this is necessary. Don’t get me wrong, I really like covers… but I don’t know if it was some kind of fan-service or just another way to fill their playtime.

The last band I watched was Wheel from Dortmund. Formed already in 2006, they released two albums since then, the last one Icarus already in 2012. Wheel were my favorites this evening, I even bought the two CDs they sold at the merch-desk. Wheel play traditional Doom-Metal. While listening to them most of the time I sat there closed my eyes and tried to follow the voice of singer Arkadius. In my opinion, the voice could have been a little louder. But that’s my personal taste.

In general the sound was quite good, there was no need for ear protection, because it was not too loud in the small club, and all the instruments were good to hear. The girls behind the bar were nice, the price for beer was okay and the toilets as clean as they can be in a Metal club. The only thing that can be critizised is that there weren’t as many people as expected. Last year, the audience was definitely bigger… That’s the reason why we organized a little donation for the bands in the forum as a little “Thank You” for their work, time and their cashboxes. All of them had some merch with them, and most of the guests bought some shirts or music. I hope that next year there will be more guests, and it doesn’t matter if they belong to the forum or not, because we’re all Metal, aren’t we?

Thank you guys for the organzation, thank you to the bands for their great work, and thank you to one of our users, Vinylian, for the great pictures of him, I was allowed to use for this review. See you soon!!!