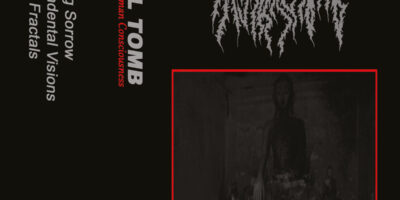 As you can see, this album was already released in April, so we’re quite slow, but I think that fits exactly to the band’s music. Life Metal is Sunn‘s ninth studio album since their first release Void from 2000. You’re wondering about the band’s name? Just have a look at Sunn Amplifieres and you get the idea.

The band’s music is quite special, because you won’t find melody and rhythm in a classical sense. There aren’t even drums. Most of the time you only hear long-lasting guitars and bass chords – holding until the sound crashes into distortion and resonance. Here and there you can also hear some chimes added to the sound, or a child’s voice telling us a story. Very creepy. If you wanted to compare them to another band, I would come up with Bohren und Der Club of Gore, a German Dark Jazz/Drone/Ambient band. When you have a look for similar artists, you can find Earth, Sleep and Ulver. Sunn O))) and Ulver already did a collaboration together in February 2014 named Terrestrials.

“Life Metal” has only four tracks but a playtime of 68 minutes. So there is simply no way to rush through the tracks to get an idea of what they play. It’s not about riffs and solos, it’s about constructing an image in your head, it has something hypnotic. Sit down, close your eyes, focus on your breath as if you tried some meditation or autogenic training, and let the music control your breath. Best way to listen to it is with a good pair of headphones. Just let the music do it’s work and let it carry you away on a dark and creepy journey.

As you can see, this is a special review. It’s hard to describe the music, and I won’t tell you about my visions and the thoughts I had while listening to the album, because that would inflict yours. Just give it a try.

As usual, we added the favorite track to our Transcended Review Playlist