Rest as Mutes – A Secret History Of Our Future (Review) 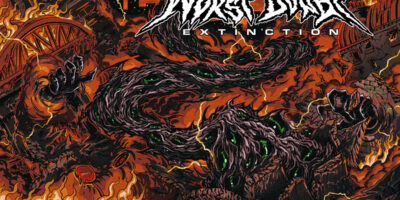 Rest as Mutes are a three-man-gang from Seattle, Washington. A Secret History Of Our Future is their second album following the debut There Has To Be A Somewhere. As mentioned by the band, the sound can be described as Post-Hardcore. Alright… let’s see or better hear what they got for us.

The album opens up with the song “Sermon”, which is nearly 7 minutes long. It starts with crunchy guitar chords and a little feedback transitioning into a riff. Instantly I got Rishloo on my mind who have quite a similar sound and build-up in their songs. Then, however, the vocals begin – and the expectations I had built up while listening were blurred. This band sounds like a bunch of drunken sailors, which I was not expecting. Wow – that was weird. During the song and throughout the entire album, I feel a certain discrepancy between the expectations I construct from the music – and the vocals we get. My colleague at work told me, after a look at the cover, that she thinks it fits because of the viking ship on the cover. They don’t need to be drunken sailors, but maybe drunken vikings… Well…

Each of the six songs on the album is longer then five minutes, the third track “Harvest” even has a playtime of nearly 15 minutes. In my opinion, it’s still impressive to hear what a trio is capable of concerning their sounds and musical output with. Bass, guitar and drums are more than enough to create interesting, varied music. “Trial”, the second song, is carried by a simple bass line that is embellished by the guitar, almost sounding improvised.

During the listening I got a little familiar with the vocals. They aren’t bad, they are full of emotions – I just couldn’t connect them with the music. I try to dive into the melodies and arrangements, but then the vocals pull me back into reality. I think that’s how people feel who don’t like Billy Corgan. I can really find a lot of interesting stuff in the music. Each song is fully packed with sounds, effects and ideas. The production and sound fits the music, the drums sound very natural, the guitars are crunchy, but thickened with several effects. What I really like is that you can hear the drummer’s count-ins on his sticks. This offers a certain kind of live-feeling, just listen to “Plague”, again a bass-driven song, where the guitar seems to overtake control up to its crazy highlight.

Eventually, I can say that you should give this release a try. Rest as Mutes definetly play interesting music. I liked lots of the melodies and lines on several tracks, I liked the natural but modern production. You can feel emotions and love in the songs. In the end, I somehow started to sympathize with the raw, rough and sometimes strange-sounding vocals. Give “Witches” a try, a song with a The Cure-ish vibe. I’m sure you will find a lot of other parts that remind you of other bands.