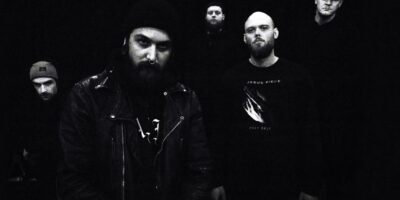 I must honestly admit that I’m a bit disappointed with the records from the Hardcore genre that have been released so far this summer, but maybe many of you are just holding back a little bit more until it’s foreseeable that you’ll be able to tour them extensively. Mutually Assured Destruction or short M.A.D. from Richmond/Virginia, on the other hand, could really convince me with their groovy crossover on their current release Fever Dream they are a fixed part of my current summer playlist. The exciting thing about M.A.D. is that their kind of crossover is not a mixture of Thrash Metal and Hardcore, but a hybrid of aggressive-sounding Stoner Rock and partly dreamy Hardcore Punk.

On the six songs offered on Fever Dream, the band varies in many areas and makes sure that you can listen to the EP several times without losing the desire to listen to it. This is mainly due to the extremely catchy metallic guitar melodies, which come across just as concisely in the groovy, rather oppressive than sleepy stoner parts as in the massive mosh parts. The proportions of the respective influences shift constantly, but without drifting off into chaos. In general, the song structures seem anything but linear and almost always intertwine seamlessly. Sometimes the stoner vibe prevails, sometimes a nasty hardcore thunderstorm.

In my opinion, M.A.D. have found a very good balance for their short band career and Fever Dream definitely has the potential to be a hit with stoner and hardcore fans alike. Especially the vocals clearly show how wide the band’s influences are. From deep roaring, catchy rocky clean parts to solid hardcore snot, M.A.D. simply deliver everything you could wish for in terms of versatility, vocals, and a record of this genre, while also providing an active link between the various instrumental passages.

In short, M.A.D. have created a musical mix with Fever Dream that is clearly influenced by the distinctive sounds of bands like Twitching Tongues, Corrosion of Conformity, War Hungry and V.O.D. People, who occasionally let Avalanche or Dull Eyes run through their sound system, will surely not get away from listening up and down as quickly as possible.

Those who prefer to listen to the whole thing on vinyl can buy the record already released in February at Edgewood Records.