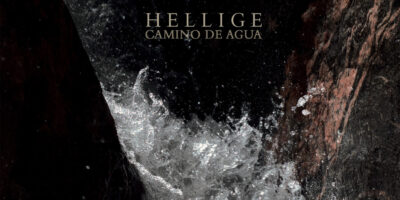 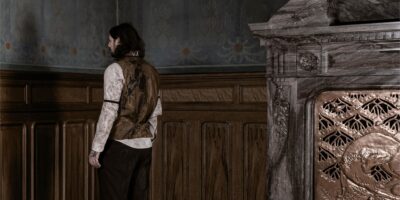 Recently I came across a new Black Metal project from Germany, where I found the cover artwork very interesting and already after a short listen I couldn’t let go. Since then, the sounds accompany me on my morning commutes while it’s dark and cold outside. Old Growth is the name of the combo, which has turned out to be a pure one-man project, which completely surprised me because of the musical diversity presented on the debut album Mossweaver. All the more impressive what you get on this long player and what quality this record brings with it. Black Metal fans with a penchant for catchy melodies and deep atmosphere will probably react similarly positively and find as much joy in it as I did. So if you are currently looking for music that will send you on a journey, you should deal with it as soon as possible.

The album begins with a very catchy melody and also gives a seemingly endless amount of grandiose guitar playing of itself in the further course. Whether with distorted riffing, as it is the case in the metallic blastbeat parts or with clear guitars, everything that the 6-stringer fabricates here has hand and foot and the potential to quickly settle in the memory of the listener. Often the melodies by Old Growth increase more and more and actually you don’t want them to fade away. Even the more aggressive and fast parts are partly very melodic and occasionally drift a little into Post Black. The vocals, on the other hand, are permanently hard and scream their souls out at all points, which makes the Post influences seem smooth only in the quieter ones – in the faster passages, nothing seems smooth and you are faced with flawless Black Metal, which can build a gloomy setting and harmonizes wonderfully with the slow, melancholic parts you are getting on Mossweaver.

To condense the atmosphere even more, there are also other sound-technical natural elements, such as playing in wind noises. The drums are in no way inferior to the rest of the instrumentals and are extremely varied. In addition to several changes in time signature and tempo, they are excellently matched to the rest, adapting not only to the respective speed but also to the different moods. Also the fact that now and then a half bar is left out brings new diversity into the sounds and makes the overall structure additionally exciting. Through a strong and absolutely successful production, each melody, each blast beat and especially the vocals can fully unfold and achieve the effect that is aimed at here. That is especially true for the guitar playing and the quieter passages and gives the listener a serious goosebumps that won’t go away. In my eyes, everything is really well here and Old Growth have delivered a breathtakingly beautiful debut with Mossweaver, which you can listen to over and over again and even want to, without losing the joy of it, or to fall into boredom.

The album was released at the end of December in all physical variants via Supreme Chaos Records and serves fans of vinyl, CD and also tape equally. There are several color versions of the double LP, a few of which are already sold out, which is not surprising given the great musical content, because Old Growth will have quickly caused a furore in the Black-Metal underground and will have the potential to become a real insider’s tip in the next few months.

Old Growth have succeeded with Mossweaver in my opinion one of the best if not the best debut albums that a German black metal band has delivered in 2020. The quality of sound, atmosphere and instruments is simply great class and especially the guitar playing testifies with its inimitable melodies for a really high recognition value. If you like frosty melancholy as well as melodic Black-Metal with a slight Post- influence, you should definitely deal with this record and will be able to lose yourself in it quickly and for a long time. Mossweaver is an almost perfect soundtrack for long walks through nature on icy cold winter evenings and already makes great expectations of what else you can hope for from Old Growth in the future.