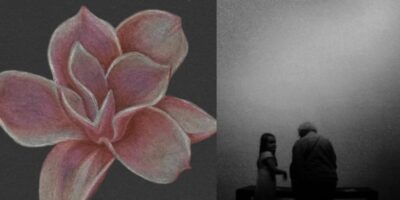 Today we have the first snow and like every year this is the moment when I can completely lose myself in various Black Metal releases. Therefore, it’s even better that I recently came across the band Silver Knife, whose first output Unyielding / Unseeing comes in handy. The combo consists of members of Laster, Imber Luminis and Lure, among others, and delivers melancholic, frosty sounds with their debut album, which can quickly cast a spell over the listener and, thanks to the intense atmosphere, won’t let go so quickly.

The almost 41 minutes playing time, which has been divided into 6 different songs here, unfolds its effect from the beginning and makes it clear that Silver Knife is composed by experienced musicians. The ride offered on Unyielding / Unseeing thrills with crisp blast beats and distinctive guitar playing, which has been packed into raw, but not too raw sound. The intentional monotony, which offers the basic framework, repeatedly sets musical accents, which are led by melodramatic melodies and can provide goose bumps in some places. Through the consistently fast drums, however, you also get the certain pinch of aggression, although the focus of the music is audibly on the depressive atmosphere. This becomes especially clear through the passionately pain-distorted vocals. The vocals remind me in many passages of the legendary Dead As Dreams record by Weakling, without simply ripping them off. The dark sound structure, which draws parallels to bands like Paramnesia purely from the sound in combination with the painful voice just fits together perfectly and unfolds more and more the further you advance in the album.

A few parts set themselves apart from the thrashing and thus tighten the soulful setting even more, especially when it gets a little quieter and the guitar comes along a bit clearer. Except for these short parts, which are occasionally peppered with emotive voice samples, you get blast beats almost throughout, steering the sound away from the post-ish and turning it into strong Depressive Black Metal, often reminding me of Wiegedood and their great debut album. Unyielding / Unseeing stands out with its great distinctive sounding melodies that distinguishes Silver Knife’s music from many other Atmospheric Black Metal bands and at the same time provides a great contrast to the mostly hypnotic passages.

This band has created an album here that feels like a journey to the epicenter of one’s own emotional world, but only unfolds its full effect if you listen to it focused and in one piece. You could probably describe the sound a bit like a car ride through Belgium. You go from one village to the next, encountering a lot of monotony interspersed with beautiful landscapes, while you seem to be standing on the spot, but when you get to one of the bigger cities, your mouth remains open because of the artistic beauty.

CD and vinyl, by the way, are released through Amor Fati Productions, offering a presentation that is in no way inferior to the sound, and is able to duly capture it visually. So if you like atmospheric as well as touching music, you shouldn’t miss Silver Knife and will be able to lose yourself in Unyielding / Unseeing for a longer period of time without any problems.