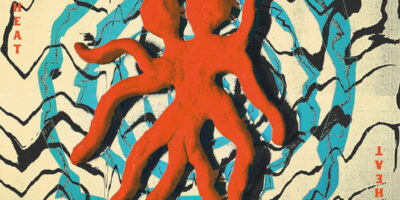 The fact that I am a big fan of the Nepalese/American Grindcore band Chepang, especially because of their constantly evolving sound should be known by now. In January, the self-described Immigrinder have released a new record in the form of a Split, which I have of course immediately taken to attention – and listened extensively. The partner for this is none other than the innovative Math Rock/Sludge-Grind Maniacs of Yautja, whose members have previously been at mischief with bands like Coliseum, Gnarwhal or Thirdface. The guys from Tennessee could cause a sensation with their dirty sludge-ish, unpredictably chaotic blastbeat sound and build up a big fan base from different genres around them. Accordingly, this is a release of two real heavyweights, from whom you can expect a lot of speed, playing skills and also musical creativity. Both bands contribute two songs each to this split and should be able to make the heart of every lover of merciless brute high-speed Punk attacks beating faster.

The Split opens with Yautja on the A-side, more precisely with the track “Test Subject.” At the beginning, Math guitars are directly thrown at us, which then increase the tempo a little and are underpinned by groovy drumming. After a short midtempo part, there immediately is a hurricane-like blastbeat part, which can score points especially with its fulminant drums and the vicious vocals. In the course of the song, however, Yautja show more presence in sludgy realms, which are interrupted again and again by fast parts, but still provide the foundation. The riffing remains chaotic and adapts to the respective tempos of the rest. Accordingly, the guitar playing is always between Math Rock and Mathviolence. However, I especially like the drumming here, because it is permanently varied, fitting and delivers inimitable cymbal playing. “Test Subject” therefore offers a successful introduction to this split release.

With “The Kindling” it goes on and you are instantly welcomed by a distorted grotesque sample of a children’s song, which immediately has an effect and puts the attention fully on the song. Straight after that, Yautja drift off into a chaotic inferno that sounds ultra-fast and violent, incorporating a dirty but immensely fitting D-beat sound alongside slight throttling. It quickly becomes clear that you can’t hope for such a high sludge content here. Gradually “The Kindling” rises further and further into frenzy and seems more aggressive from second to second. The direction is clearly delivered by the very distinctive guitar. Meanwhile, the drums again lay everything in ruins and push only rarely groovy bars. Although the track sounds clearly more like Punk than “Test Subject” it is not less interesting. Stomping parts, blast beats and an occasional light cyber vibe allow a lot to converge and be discovered here. Especially the bludgeoning part towards the end brings out everything again, rounds off the A-side perfectly and leaves absolutely nothing to be desired.

“Seto Baag” is the first song Chepang deliver and with which they open the B-side. The song is already some older material of the band and not quite as experimental as the current stuff. Right at the beginning there is a guitar intro that doesn’t reveal much but gives me 90’s feeling and reminds me of Machine Head. Shortly thereafter, an intense drum roll really kicks off the track, letting down on us a very sludgy, pounding sound rain. The guitar sounds very groovy and could be acoustically mistaken here with a percussion drill. At the same time, it also whips the vocals further to the front in order to have it seem just like a speech of rage that wants to puke out everything that frustrates the soul. Although “Seto Baag” marches mostly in midtempo, it comes across as really ill-tempered and aggressive. At some points, Chepang also build in slower and super violent passages, to which you just want to lash out and mosh, which forms an excellent contrast in combination with the blast part at the end and keeps the title exciting throughout the entire playing time.

“Kathemandu_Chihan Ki Pari(Bijuli Re-Blast”, on the other hand, bludgeons without much preliminaries at high tempo and shows more of the usual Grindcore that Chepang usually present us. The Grindparts go seamlessly into fast D-Beat passages and change smoothly in between, without overstretching the arc. The deep, distorted guitar playing stands out for me, which also makes use of some dissonance here and makes the sonic sound a bit spaced out in addition to its brute force. Otherwise, the two drummers here drift into a trance and secretly celebrate their own blastbeatfest. It’s simply outstanding how the two drums keep increasing and thus make the mosh parts sound even harder than they already do. Speaking of mosh parts, the band has included a few in this track as well, culminating in a huge break where the riffing is even more badass than it already was. After this point, the massive drums come to the forefront again and also the level of dissonance of the guitar is increased again briefly, until the split ends.

Both bands neatly delivered with their songs, whereby I liked the two 2nd tracks more in each case, because they simply delivered more speed than the respective openers. Nevertheless, the two sludgy pieces also have it all and are in no way inferior to the brutality of pace.

Since January 15, you can buy the split via GCBT Records in two different vinyl versions, each of which is an equal eye-catcher to the presented sound and the quality of the music in no way less. Although the 7″ has rather unusually long songs for the genre, it is still quite a short playing time, which can satisfy the listener 100% in any case. You get what you can expect from the two bands, namely high-quality, versatile Grindcore with brilliant production and excellent instrumentation. Here it shoots out of holes and it is offered non-stop action, which you want to pull in again and again, without a feeling of saturation or boredom setting in after a few runs.

It quickly becomes clear that Chepang as well as Yautja do justice to their current status in the international Grindcore scene and that with this split two bands have found each other that are similar in their progressive interpretation of the genre, but by no means the same thing. If you like recorded frenzy and are comfortable with bitter malicious audio terror, you can bag this violent record without hesitation, you will have pure joy with it for a long time and probably be able to get rid of some excess energy during listening. In short, a split release that will please almost every Grindcore fan and can increase the anticipation of the future albums of both bands again immensely!