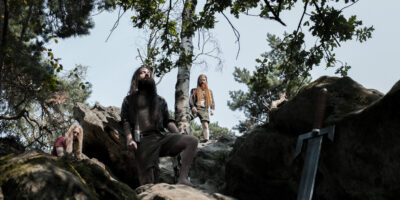 Interview with Eremit (Bearer of many Names)

I miss festivals so much.

I notice that especially now that Cannibal Corpse have released their new album Violence Unimagined. Let’s take the opportunity to dream a little sentimentally.

I imagine myself standing on a dusty field. It’s evening, so the air has cooled down and only the glaring stage lights and shining billboards of the stands illuminate the area. The ground is soaked with sweat and beer and gives off a spicy smell. My feet hurt from standing for so long when the music from the tape stops and Cannibal Corpse take the stage. It starts without losing many words.

They start with “Murderous Rampage” and we bozos in front of the breakwaters start running in circles like maniacs to this orgy of violence set to music, straining our necks. Everyone tries to keep up with the Corpsegrinder, but his headbanging is just out of this world. We bump into each other in the crowd, everyone is happy. What a fat opener. Without a breather, the set moves into “Necrogenic Resurrection“. Short introduction, then it’s right into your face. The riffs are just as merciless as the drumming and lyrics. I’m sweating in the crowd, while someone next to me spills cold beer. At the latest at the break there are not only dead that are part of a song. Strange hair blows in my face and I tax the hustle and bustle in the crowd as if hypnotized. “Inhuman Harvest” we all know already, which is why many are particularly going berzerk now. Meanwhile, I’m pleased that Cannibal Corpse have stayed true to their style and path without seeming too exhausted. During the song’s thick middle section, I catch myself headbanging along with my eyes closed and my teeth clenched, not thinking about anything. That’s freedom.

It continues in a nasty manner with “Condemnation Contagion“. I take advantage of a moment, move forward and watch the guitarists at work as they cut meat and break bones, while the Corpsegrinder roars into the microphone without mercy. Then full throttle ahead again with “Surround, Kill, Devour“. The thing drives so mercilessly that some fans rush at each other once again without detours. A flurry of hair, band merch and beer ensues. Any energy is given free rein. “Ritual Annihilation” describes the action perfectly. While this monster rages, I pull a joint out of my cigar tube. A cloud of cold smoke drifts along and I enjoy the moment, standing a little apart while fans happily smile and brush their wet hair out of their faces. After a few puffs, I’m one with these riffs. I stay that way and get “Follow the Blood” blasted around my ears, which is hard to move to. Tense and exhausted, we all look towards the stage together. A friend brings me fresh beer and I down the cool, bitter wet as the first ones let their hair spin again. Life has never been better than now.

As “Bound and Burned” evokes the first signs of fatigue, it comes that I even feel my aching back from standing. I’m rocking back and forth on my legs while powerful, but not very memorable guitar melodies are hurled from the stage. I hear Deicide in the solos and rejoice. The song drags and I look around, seeing merchandise from Death, Devourment, Grave, Asphyx; I’m among like-minded people. “Slowly Sawn” then snaps us all out of our reverie once again, though. This riff, how nasty! Again the pit is thumping, while some headbangers get their hair caught in the manes of others. The field becomes a stinking tumult of spiked flesh. I love this.
And then full throttle one more time as the band takes no prisoners with the fast-paced “Overtorture“. Once again the people run in circles to the sermons of their headbanging messiah. I have long forgotten all the worries of my everyday life. Paradise lies in hell.

The Corpsegrinder announces the last song of the night, a barrel-chested beast called “Cerements of the Flayed“. Some beat changes instantly make the thing more interesting. One last time forces are mobilized, metal horns are raised, beers are spilled. The band beats us up musically and leaves the stage satisfied, we the field. What I need now is an overpriced tarte flambée and another beer.

I miss festivals so much.

Interview with Eremit (Bearer of many Names)