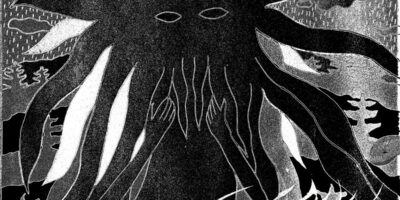 The last time I reviewed a Full of Hell record I thought of the old horror-movie Poltergeist. Now with Garden of Burning Apparitions another movie comes to my mind: Johnny Mnemonic. A science-fiction-movie starring Meme-Community-God and overall nice human being Keanu Reeves. In the future it will be possible for humans to store a lot of data on your brain-harddrive. Information is a currency, so it is very profitable to transmit this kind of intel via courier.

In one scene it is said that putting too much information onto your brain-harddrive could fry your brain. And this is exactly like listening to the new Full of Hell album.

Full of Hell are a permanent onslaught onto your ears and everything that a human ear can bear. Most of the time it is grinding, sometimes it is harsh Noise („Derelict Satellite“ or „Non-Atomism“) and all of the time it is challenging.

The overall production of the album emphasises more the Punk and Grindcore-Roots of Full of Hell. The album sounds raw and distorted, even more than before.

Unlike the previous album, this time there is no long track on this album. The longest track clocks in around 3,5 minutes, the album closer “Celestial Hierarch“. I’ve always liked those epic tracks, but on this album it would likely disturb the “flow” of the album. The mentioned track sums up the qualities of this album perfectly, grinding madness and noise.

Full of Hell continue to be the best in their own league. Combining two very abrasive genres and merging them into one even more abrasive chunk is the prime discipline of Full of Hell.

12 tracks spanning 21 minutes is all that it takes to leave you wondering how could anyone listen to this without being forced to do it.

Because it is art. That is why.