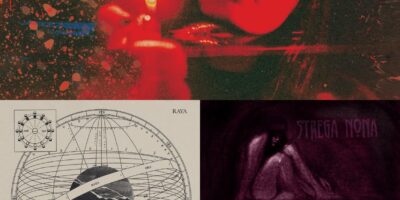 To me, Brutus is – besides Mantar, a German Doom Metal Band – the most interesting young band project that, in my opinion, is going to have a bright future. Nest is the second album of the 2014-formed-band. Their first album Burst from 2017 gained a lot of positive reviews and this album could be spotted on many “AOTY” lists. The combination of aggressively played instruments, the great voice of the female drummer Stefanie Mannaerts and a sound that simply feels new to made this band to one of my favourite discoveries in 2017, and maybe one of the best albums of the 2010’s.

Now, 2 years after Burst, their second album Nest came out in March this year, their two pre-release singles “Cemetery” and “War”, which are both great songs, increased my curiosity, so we should start with the album.

Brutus starts their album with the song “Fire” and if you know their first album, you will immediately recognize these riffs and drums, even if you can’t hear much or it’s not that fast and aggressive as you know it from before. As it says in the lyrics – the “fire burned them all” and they are “breaking your walls down” – you can feel that. What a beginning for an album! The song marches directly into your ear, this Stefanie Mannaerts’ voice, nice transitions from intro, chorus and solos are very good and you will meet that in one or another song too. That’s the Brutus I have known before, that’s the Brutus like. The second song “Django” has again these distinctive riffs, drums and voice, slow and melodic parts are switching with fast and aggressive sequences. One big flaw in my opinion is Stephanie’s often repeatedly usage of “a”, “e” and “u”, a point that you will find in a lot of parts on this album. “Cemetery” starts like “Django” but creates an own more intensified atmosphere for the listener. The rhythm and the knocking sound don’t let you keep your feet and head quiet. Every instrument tries to be better than the rest, but the voice surpasses them all – a nice emotional and kind of quite sequence at the end gives the song a perfect balance.

With “Carry” it seems as if Brutus try to play with some other ideas offside from typical Brutus-Style, but it always has this DNA in it. “War” starts with a more silent part, reduced sound until the interlude. The voice is more emotional than before and you can hear weeping in it, the “unleash war” will go right through you. Maybe you can say that the interludes in this song are a certain type of war: wild, all against the other instruments, it’s exhausting in a positive way. “Distance” is more playful, the drums are not as significant as before and it’s more melodic. Brutus show us, they can do other stuff and that’s great. The ninth Song “Space” again showcases a big flaw: as good as the voice is – it can sometimes block the instruments from their impact for the listener. In my opinion, this song would be a better instrumental song. “Horde V” starts just like the name suggests – wild, aggressive and like a stampede. The drums pick off the reins for the other instruments, and it’s great. The last song of the album, “Sugar Dragon”, signals that we will be getting to the end of this album. Brutus present for the last time what a talented band they are and with this they say goodbye. After the albums ended, I needed a little break and rest – to get some air. What a ride, I wish I could say thank you for this sonical goodbye.

Some flaws though are still existent on this album, and they are grave in my opinion. I think the album could have done with two less songs. “Techno” and “Blind” are too safe songs compared to other songs on this album and disturb the overall list of tracks. Another negative aspect are the vocals. Stefanie’s voice is awesome, but sometimes it’s exhausting to hear it, mainly if she only carries the song with her one letter lyrics. The sound of the instruments of this band is strong enough to keep the energy of the songs up, they should have the courage to make more or longer instrumental parts, I think it could be positive for their songs. And, sometimes the sound reminds me too drastically of Burst. Solely these three points are very big in my opinion, and an argument against a higher rating, which hurt me a little deep inside. But Burst turns out to be slightly better than Nest, which maybe comes from the element of surprise for me as I discovered them.

I can only repeat myself, Brutus is one of the most interesting younger bands that enters the stages of clubs, festivals and bars now. I can’t find other bands with this energy that you can feel through your body. I wish them good luck for their future, I am still curious with what kind of music they will be surprising us in the future.