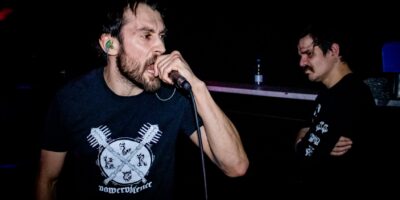 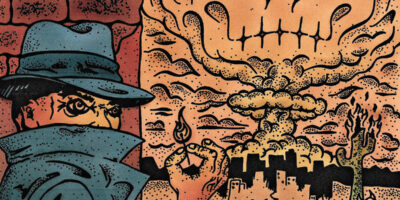 The Nepalese-American band Chepang being one of the most experimental and maybe even most innovative Grindcore bands that can be found on our planet at the moment is something the Grindcore community should have known at least since their, to be honest, slightly difficult to approach record Barriga de Verme. With their new longplayer Chatta, these guys row back a bit towards their first LP Dadhelo and limit their active trying out to intro, outro and remixes, while the rest of the songs only show well-timed, distinctive influences of this kind.

Due to the fact that Chepang presents two drummers at the same time, the merciless blast beat parts of course, as usual, tear everything to pieces. The Grindcore-loaded main part of the LP also impresses with fast and partly unbelievable dissonant riffs which definitely leave a lasting impression in spite of the chaotic vein and should make music – and technician nerds – freak out. Whereas for example the use of a saxophone finds its place in the opener and also a lot of noise influences and all sorts of other audio violence have been incorporated in the last two tracks. while most songss are limited to merciless, slightly avant-garde high-speed punk. Because of the oppressive guitar playing you inevitably get the feeling of being on a nightmarish trip with a futuristic noir setting that somehow hurts, but at the same time is so addictive that you just don’t want to get away from it anymore. On the other hand, the vocals can be described as a combination of poisonous shrieking and deep roaring, which is perfectly attuned to the different instrumental parts and are making the disturbing sounds almost tangible.

However, the biggest advantage of Chepang is their magnificent and unpredictable songwriting, which is bursting with inventiveness and not only brings out a mega fast whistle-storm in addition to versatile mosh and stomping parts. Furthermore the songwriting also provides especially high long playing suitability because you can play Chatta almost endlessly without discovering all those secrets. The production brings out everything that is possible and manages to match the almost difficult to catch sounds perfectly and is able to give it the necessary intensity. As a little gimmick there are four different remixes of some of the songs at the end which surprised even me, as a person who is not that much into electro music. This gives the longplayer a worthy ending, though. The different LP versions are almost completely sold-out and show how popular this record is in the Grindcore scene and beyond. At Holy Goat Records you still have the chance to get a peppermint green record,though, which is based on the legendary East German liquor “Pfeffi” and probably contains just as much disgusting stuff that simply blows your mind when consumed over and over again.

With Chatta, Chepang have released one of the most innovative and at the same time most authentic Grindcore records of the last few years because this album is pure anti-music just the way it has to sound. Due to its own abstract dynamic that runs through the whole record, Chepang creates an inimitable balance between repulsive and attractive music. Chatta should definitely be listened to this year and will definitely be in some AOTY lists – it certainly will be also in my own. So don’t waste any time and listen closely!