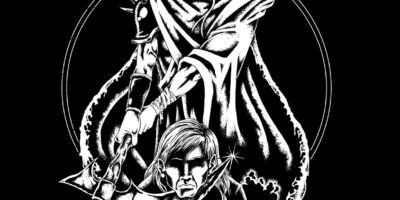 2005 was a great year for my Hardore-music socialisation. In that year The Chariot released their second album The Fiancé. It paved the way for a lot of chaotic Hardcore albums that would fill my heart with joy. The opener of this album (“Back to back“) is one of my favourite songs in this genre.

Gouge Out play Hardcore like it is 2005. Expect discordant, sludgy riffs, with vocal chord shredding screaming and stomping rhythms. On this EP you can find five tracks of noisy Hardcore, condensed to 18 glorious minutes. The sound is gritty and thick enough to get the listener moving and creates a very visceral vibe.

“Nine Eyed” is my personal favourite on this record. It drags you along until it squashes you with its huge breakdown in the middle. My face looked a little bit like the one of the lady on the cover, after the mosh-part set in.

Introspection Rundown is a very good, quick, fix of sludgy, chaotic hardcore and is recommended to anyone who has a weakness for abrasive sounding music. This record takes me back to when I was new to this genre and I hope that I will hear more of this band.