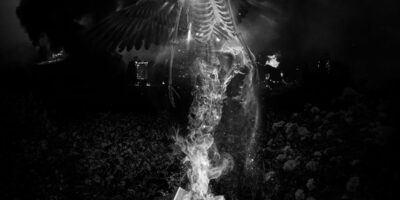 So California-based Mincecore band Haggus released their latest release Straight from the Slaughterhaus this year. The monocrome cover shows cows in a field of skinned human remains in front of a factory. So far so good, but what is hiding inside?

The intro is slow but gives the first impression of what this will sound. It’s a bit scratchy and conveys pretty rancid vibes. This is a good thing, because as soon as it’s over you are hit with some nasty grooves and you know that are you in for some quality Goregrind (they call it Mincegore, but hell this is some fine groovy Goregrind if I ever heard some).

The riffs are easy and primitive but various enough that it never gets boring and are supported by rythmic drums. This mixture creates mostly hardhitting midtempo grooves, but occasionaly goes fast for some nice rushes of brutality. That pushes through the whole thing that ends on a real killer of aggressive grooviness.

The vocals are mostly inhumane downshifted grunts mixed in with dirty, nasty shouts and some shifted squeals that are as inhumane as the deep ones. The whole thing invites you to dance throughout the playtime in its raw, dirty, groovy glory. That gives you some of the absolute finest Goregrind.
Must listen!