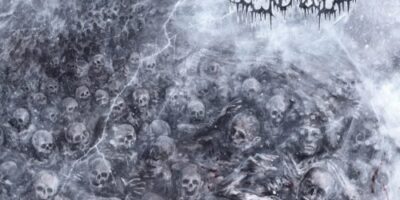 “Something is rotten in the state of Denmark.”

Three years after the last album, Undergang are back with Aldrig I Livet. Remarkable, since it is already the fifth album of the Danes. At the latest with Misantropologi, the quartet has made a name for itself in the Death Metal scene. Of course, the bar is now very high. A whole nine songs Undergang have in their luggage. Those who know the band, know exactly what you get. Disgusting and uncompromising Death Metal. But it’s not quite that simple, because these Danes reinvent themselves. The die-hard fan doesn’t have to hyperventilate now, don’t worry.

The quartet remains true to itself, only to me the new album seems more atmospheric than its predecessors in some places. In the usual Undergang manner, the opener “Præfluidum” and the following song “Spontan bakteriel selvantændelse” will blow your ears. The pithy nagging vocals are still there and more disgusting than before. Unfortunately they could have been louder at some points. The whole thing is supported by punky drumming and thick riffs. Here and there the guitar playing reminds of Dismember and the younger days of Carcass. You can hear this especially well on “Indtørret lig” and “Ufrivillig donation”. Here and there you can hear the atmospheric parts clearly. Especially the solo in the song last mentioned is one of my highlights.

For me, the album seems like a horror movie. The whole running time you have the feeling that a serial killer is following you. There is no escape, no matter how fast you run. The brute drumming simulates the steps of the killer who is chasing the victim. This is especially effective on “Usømmelig omgang med lig”. The melodic guitar part builds up tension and shows how much the band has developed. Parallels can also be found in the title song, which has an extremely playful beginning. At the same time it is the “Slow Burn” of the album and seems unexpectedly calm for Undergang conditions.

Even if terms like melodic or atmospheric are used here again and again, Undergang don’t forget their roots. The Danes still play the same kinky Death Metal as on the previous releases. Songs like “Menneskeæder” or “Rødt dødt kød” clearly show how scary and morbid music can sound. Especially the vocals are hard to beat in disgust. It resembles an execution what singer David delivers here. With “Rødt dødt kød” you finally get to feel the last knife stroke of the killer. A worthy conclusion, inviting to stomp. The coup de grace follows at the latest with the solo, before you will drown in your own blood puddle.

Undergang actually do everything right. You keep the usual strengths of the last releases and supplement them with new atmospheric elements. The Danes remain one of the best Death Metal bands of the last years and more than do justice to their own hype. If you are in the mood for bestial Dödsmetal, you won’t miss out here. Simply disgusting!