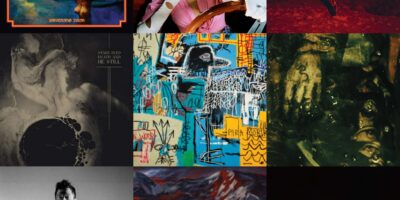 15 – Beneath the Massacre – Fearmonger
[Century Media]

Don’t call it a comeback. After eight years, the Canadians are back. If you like technical death metal, you can’t miss this album. The whole thing is paired with thick breakdowns and a sound that probably comes directly from the Matrix. A very strong album, which goes like a hot knife through butter. As for all releases on this list, I can’t wait to hear the new material live.

OSDM seems to be more in demand than ever. Some bands manage to hit the 90’s zeitgeist, others don’t. Those who definitely manage it are Necrot. Mortal convinces all along the line and makes the old metal heart beat a few BPM faster.

The next OSDM release. Here it is more about the European sound. Exactly this is what you get here, full broadside. LIK are no longer an insider tip. Unfortunately Carnage couldn’t really convince me. However, the Swedes manage to convince with Misanthropic Breed on full line. HM2 sound in finest Dismember manner.

Let’s stay in Sweden. I have to be honest, the bar was high here. Mark of the Necrogram ran up and down with me. But I felt the same way about the new album. Necrophobic succeeds in packing atmosphere, raw violence and concise melodies skillfully. Some riffs literally burn themselves into the brain.

For a long time it was quiet around Rotting Out. All the greater was my joy when this year finally new output appeared in the form of an album. The vocals sound more aggressive and edgy than ever. Just this aspect makes Ronin so good. An album that got me through the first lockdown well and just spreads joy.

For 21 years Anaal Nathrakh have been making the world and some auditory canals bleed with their apocalyptic sound. Of course, there have been some minor changes now and then as far as the sound is concerned. One experiments and is not too shy to incorporate new elements. On Endarkment the melodic influences definitely are what predominates compared to older albums. But exactly this characterizes the sound and makes the album palatable to me.

9 – Nothing – The Great Dismal
[Relapse Records]

Whether you want to call Nothing a shoegaze, dream pop or indie rock band, it doesn’t really matter. The Great Dismal is a diverse album. Perfect for long car rides or just dreaming. Sounds a bit cheesy, but I really can’t think of a better description for this masterpiece.

While the last albums all had a strong Pestilence influence, a big preference for Morbid Angel shows up here. The line up change has done Skeletal Remains good. The Entombment of Chaos sounds refreshing, although they clearly stay true to their roots.

It’s no surprise to me that Undergang made it into my top 15 with Aldrig i livet. What I didn’t expect, however, are the small but fine novelties that the Danes present on their record. For a detailed review you can read my review of the album.

Hardly any band has impressed me with their debut as much as Undeath. Lesions of a Different Kind is a strong album. If you didn’t know any better, you could easily think that this might be the band’s third or fourth album. Everything seems clearly structured and harmonizes perfectly with each other. For a detailed review you can read my review of the album.

After five years Xibalba announce their return with Años en Infierno. With a lot of rage in the belly this album really destroys everything. Besides the typical hardcore elements, especially the death and doom metal influences flash out, even more than on the previous releases. Whoever is able to stand after Años en Infierno deserves my respect, what a destruction!

No album have I heard more often this year than RTJ4. The hip-hop duo consisting of El-P and Killer Mike clearly shows that they have now arrived in the hip-hop Olympus. The album is creative, there are some very innovative elements and the guest appearances round the whole thing off perfectly.

Do you know Braindead? If not, you should close that gap in your education as soon as possible and watch this film. Sulfuric Disintegration feels similar to Lionel when he massacres zombies with the lawnmower in the movie. Nothing more needs to be said about this album. Watch Braindead and listen to Of Feather and Bone!

Already since Scorn I follow this band intensively. It’s a mystery to me how Primitive Man manage to top their previous album every time. At some point the slowest and at the same time most disgusting part has to be written. Apparently there is no limit for P/M and superlatives are a foreign word to this band. I dread to think about the next album already, because Immersion is more than sinister.

With a mixture of Death Metal and Hardcore Terminal Nation deliver the perfect soundtrack for the year 2020. You would like to destroy everything you come across. An album can’t sound more fitting. The zeitgeist exactly hit and packed with a lot of anger. Holocene Extinction, my album of the year!