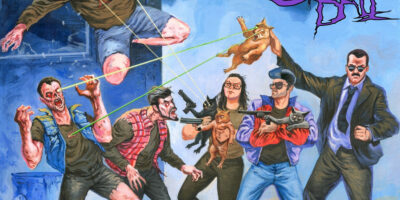 After I have been listening almost only to Black or Death Metal during the last weeks, I was in the mood for something different and a heavy and melancholic Doom record. So my friend Leo’s recommendation to check out the British Blind Monarch came just in time, which was why I tested their first and so far only album What Is Imposed Must Be Endured. The slow, viscious wafting sound can be classified somewhere between bands like Hell, Ommadon or Grief, and therefore they could pick me up right away and captivate me directly. Punishing Metal, gloomy atmosphere and a lot of bass make this record just the right thing to be pushed away in a monstrous slow motion way.

Right at the beginning I want to recommend you to listen to this album with headphones or a good sound system, because otherwise you will lose the distinctive bass, which is the basic framework of the album with its many strong lines. You are hardly into this record when you already become aware of the deep malice of the sounds of Blind Monarch. However, not only the beginning is weighty and captivates with its delicious slow pace. In the course of the album, it turns out that the tempo is not increased, but rather sometimes throttled and thus at the same time reveals the concise feature of What Is Imposed Must Be Endured. That’s exactly why the whole thing builds up a leaden heaviness that overlays itself hugely and massively on the listener and pulls him so deep into it that you forget time entirely. In addition to the deep 4-string, you come across strong drumming, which for me is always very important in this genre, so that the entire record does not fade into nothingness and boredom. Here, however, the drummer can do justice to all the tempo changes and the disgustingly mushy sounds and also perform them seamlessly – especially with the hard bass drum and the versatile cymbal playing that always fits.

The album traverses many bogs and alternates between Funeral Doom and Sludge in the song structures. This is especially noticeable in the vocals, as in addition to a monstrous-sounding roar, the nastiest screaming comes through so clearly that you can tell which part of the album you’re in. In the doomier parts with the ultra deep and intense guitars, the speed is repeatedly brought down and brings the machinery almost to a standstill. This then seems as if everything immediately ran backwards to contract, but then each time it powerfully picks up again and passes into melody-laden passages, which draws the melancholy of the band. The sludgy part, on the other hand, seems like a chewing gum that you want to remove from your shoe in the mud. Incredibly dirty, viscious and striking thanks to the terrific vocals. In general, the long-player unfolds again and again to then flatten with the mudslide of Doom so that you can get into the atmosphere very easily and fall for it after a few minutes.

A true nightmare that solidifies thanks to the droney undertone more and more, the further you advance on What Is Imposed Must Be Endured. On the last song, you get some exciting epic-like choral vocals towards the middle/end, which are fed in from the background and which particularly stand out on this album due to its independence, but also fits perfectly into the drawn picture and thus sets the mood for a worthy ending.

The gorgeous looking and long awaited vinyl version of What Is Imposed Must Be Endured is already available and ready to pre-order through Heavenly Vault and Dry Cough Records where it will then be officially released in March. Tape and CD edition was out for sale via Black Bow Records and dropped in April 2019 alongside the digital album. But since Blind Monarch have concocted a very powerful work here of almost one hour, it is completely recommended to get the double LP to get the full enjoyment of the songs and to get the feeling of the extremely dense atmosphere at all.

For anyone who likes vicious and desperate sounding Doom, these Scots can be recommended as an insider tip. What Is Imposed Must Be Endured hovers for its strong quality and good songwriting in any case still far too far under the radar and should actually easily find great resonance in the underground Metal. Especially now in the cold dark winter days, it is very suitable to forget time with Blind Monarch and surrender to the deep melancholy of this double LP.

Favourite Tracks:
“My Mother, My Cradle, My Tomb“
“Living Altar“