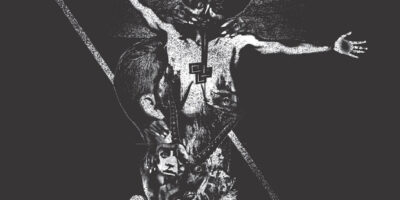 Remembering the effect Long Distance Calling had on Patrik a week ago, I have to admit that I was lucky enough to already experience at least two Shogun open air shows at the JunkYard last year as well (Destruction, Amenra). This means that the draught I experienced was not as tough as the one Patrik was talking about. Nevertheless, regarding the fact that 2020 brought up a sum of two concerts within the entire year for me, it is still possible to talk about a goddamn shortage that is still continuing. Thus, I was happy enough to join Patrik at LDC – but I was even keener on getting to visit the Tombstoned Fest that brought my first Death Metal live show since 2019.

Looking back at 2020, there already was a Tombstoned Fest planned by Shogun Konzerte and this was also originally planned to be a team event, so Steven already booked a train to stay here over the weekend – what happened then is probably no secret to anyone reading this. Good turn about this story, though – it’s about one year later and the Tombstoned Fest eventually takes place (although seated now – but who gives a shit) – and Transcended Music Blog is happy enough to even present the show (all the love to Shogun)! Thus, it was a no-brainer to visit this event, which means Thomas and I did not wait to get our tickets and were all hyped when the evening came.

This show was taking place on a Sunday, which means there was no big deal about the journey to and fro since – you know – work and other capitalist bullshit. Having arrived, we went to grab at least one beer before the show started and headed towards the JunkYard. Both Thomas and I had already been at the location last year so we weren’t new to the environment – nevertheless it still remains a damn great place. Once inside, we had to take our seats in order to take off our masks, Lifetaker vocalist Konstantin joined us and we waited for the first band to start. To state in Thomas’ words: “I can’t wait to finally be yelled at for a few hours.”

The first band to start off the evening was Heretic Warfare – a band that was already a name to me since I was pushed towards listening into their music by the organizer of the show himself. The evening can’t start off any better than instantly being thrust to the ground by blast beats, growls and fast and furious Death Metal. Just the thing you need after not having seen a show for yet another year. Heretic Warfare played a damn good set and made hunger for more acts to come. A little technicality here and there but overall just show-no-mercy right-in-your-goddamn-face Death Metal that picked up the vibe that was maintaining presence in your mind of lockdown and pandemic-filled past.

The next load of straight-up Death Metal was already waiting when Carnation entered the stage. Slight irritation when the vocalist came on stage spilled with blood wearing a green shirt – although I was still not able to detect what it actually was that made his arms appear green. Nevertheless, worries were pushed aside when these guys took off with their first track. Recollecting opinions I heard after the show, it seems as if Carnation had been the secret headliner of this evening for quite a lot of people. I have to admit that I was not aware of this band, but the sound was damn convincing. A wall of Death Metal combining the sounds of late Cannibal Corpse vocals and early Death riffing and slight technicality delivers an interesting mix that was delivered on point during this show. Especially vocalist Simon Duson showed that he is capable of upholding full energy throughout an entire gig. Great start and exactly what I needed for this evening – fuck yes!

After trouble because of the fact that Slaegt had issues arriving from Denmark, AHAB were courageous enough to pass on their headliner spot and play on third spot – which was a bold move in my opinion. Thus, the mood was now to switch from blast your face off Death Metal towards absolute downtempo Death Doom. If you are into AHAB you are probably aware of the fact that the sound differs widely from Carnation or Heretic Warfare – which was the perfect variation for the evening. The only downside about the fact of AHAB playing earlier was that it seems to have taken off the vibe of the music when playing during daylight. Nevertheless, this was no problem to deliver. Brilliant melodies, great riffs and vocals that were pretty much scratching on the lowside of the surface brought across a heavy wall of music that is carried along by the fact of being played live and making use of massive amounts of bass.

In order to induce the culmination of the evening, Slaegt entered the stage at last when darkness had already fallen. Honestly, this was the band I was secretly waiting for. Although I was not aware of Slaegt in the beginning of last year, it was the lineup of the intended 2020 Tombstoned Fest that first introduced me to this band and their very specific and distinctive sound mixture of a Black Metal tone, Thrash Metal riffing and this nuance of Heavy Metal vibe. When these guys from Denkmark entered the stage, it was already evident that the live show was going to be a great final of the evening. The sound was damn great and Slaegt absolutely delivered with their set, playing music that ranged from fast and aggressive melodic Heavy Metal tone up to blasting 1st Wave Black Metal sound – finishing the evening with one of their guitarists even running along between the seats of the show.

What an evening! Again, we didn’t give a shit about the fact of listening to our favorite music while remaining on our seats. Yes – you are able to enjoy your music way better when standing right in front of the stage. Yes – sitting while listening to blasting Metal feels different. Nevertheless, listening to your favorite acts play live in this constellation still remains a thousand times better than not being able to visit any live shows at all. It still remains possible to support your favorite acts, go out and enjoy music with your friends, support the venue you spend major shares of your life time at (support the Junkyard, goddamn!) and fucking lean back. Even better times are about to come as well!